Photos of Whitby and Saltwick Bay on the Cleveland Heritage Coast and at the edge of the North York Moors National Park. 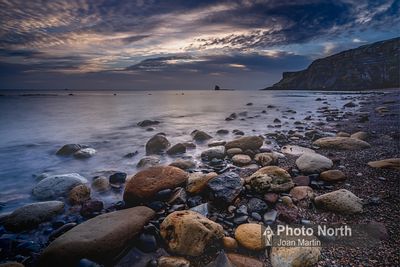 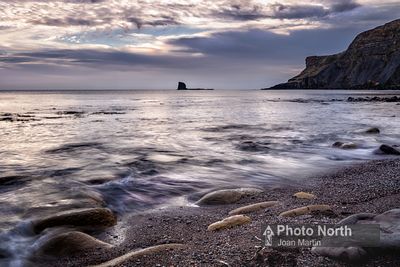 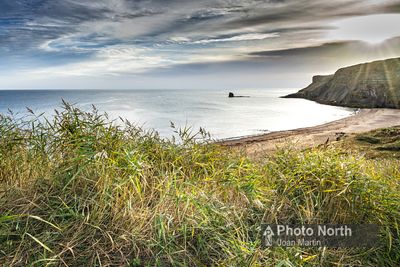 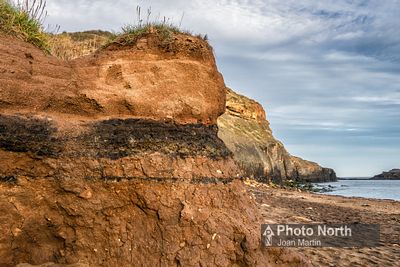 SALTWICK BAY 10A - Thin coal seams
Thin coal seams in the sandstone cliffs of Saltwick Bay near Whitby on the North Yorkshire Coast.
Coal is a sedimentary rock formed from peat (the remains of plants which lived millions of years ago in tropical wetlands), and compressed by the pressure of rocks which were later laid down on top. 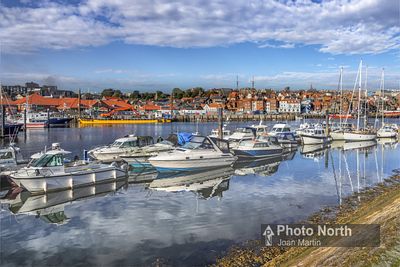 WHITBY 01A - Whitby Upper Harbour
Boats in the marina, the upper harbour, Whitby in North Yorkshire.
The swing bridge that spans the River Esk between the upper and lower harbours can be seen to the right of the photo. The yellow dredger is moored on the far side of the harbour. 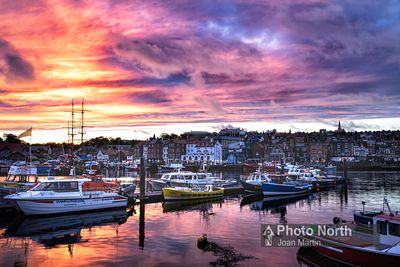 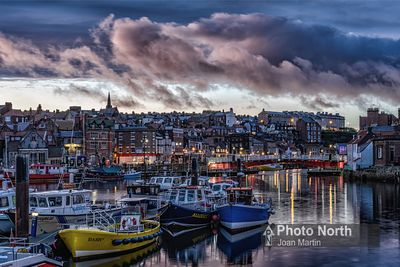 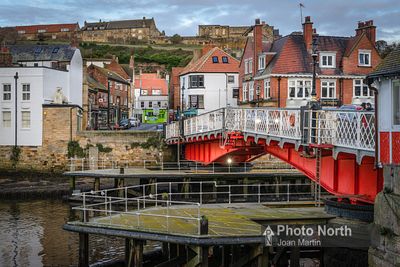 WHITBY 04A - Whitby Swing Bridge
An evening view of the swing bridge over the River Esk in Whitby, North Yorkshire.
This pedestrian and road bridge was opened in 1909 to a design by J Mitchell Moncrieff. 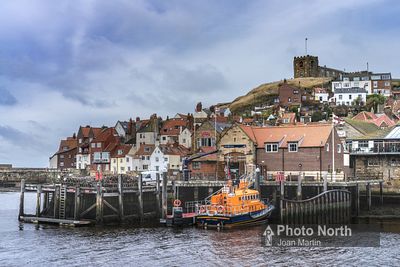 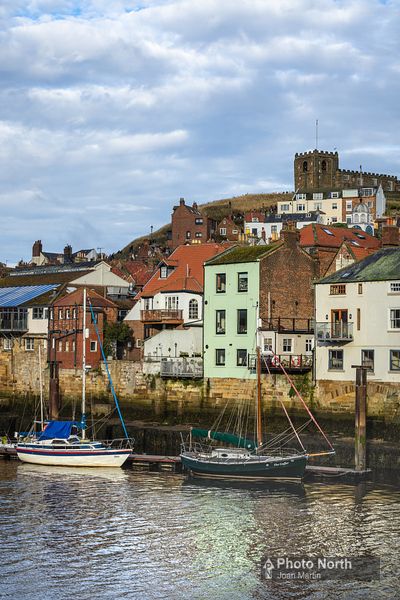 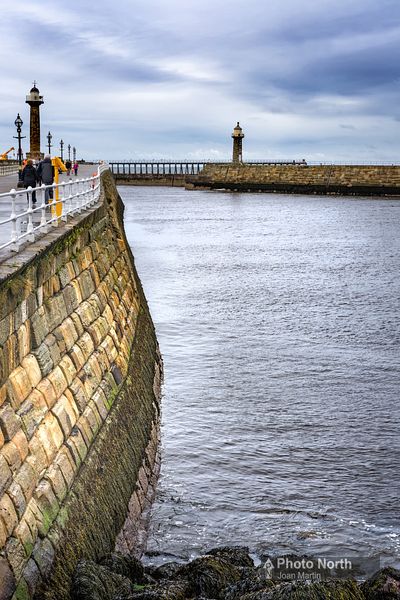 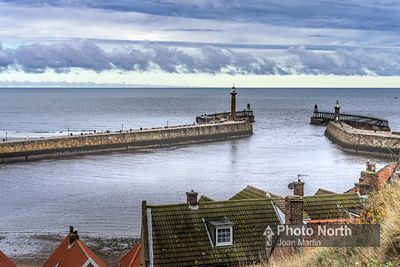 WHITBY 06B - Whitby Lower Harbour and Lighthouses
Whitby Harbour entrance and the 4 lights, Whitby in North Yorkshire.
The West Pier lighthouse is just over 22m tall and was built in 1831 of local sandstone. The shorter East Pier Lighthouse is almost 17m tall and was built in 1855.
Red and green lights are fixed to the painted towers situated at the end of each pier extension. The left beacon shows a green light and the right, red, so that from the sea, port and starboard are in their correct positions. 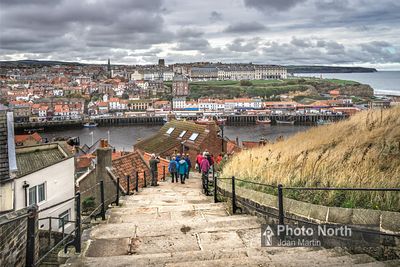 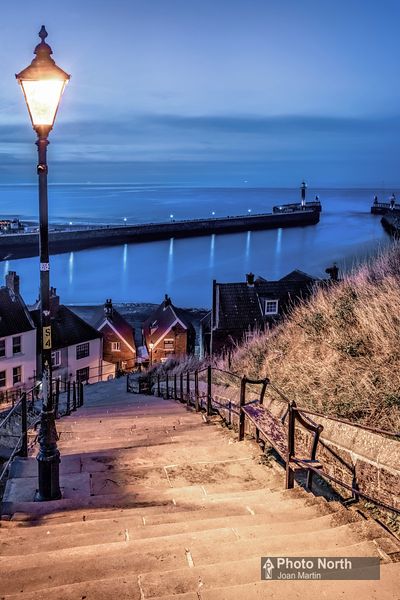 WHITBY 09A - Whitby Lower Harbour from The 199 Steps
Whitby Harbour at dusk taken from the 149 Steps, Whitby on the North Yorkshire coast.
The stone steps leading to the parish church and abbey replaced wooden ones in the early 1800s.
The steps are mentioned in Bram Stoker's novel, "Dracula". Dracula, in dog form, runs up the steps after his ship is wrecked. 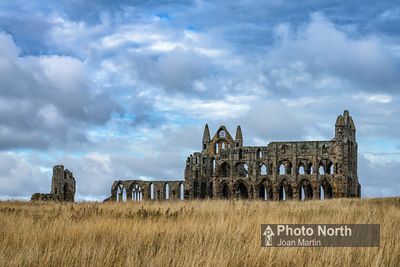 WHITBY 10A - Whitby Abbey
Whitby Abbey, Whitby in North Yorkshire.
The first monastery here, founded in the mid 7th century became one of the most important religious centres in the Anglo-Saxon world. In 664 it was the setting for the Synod of Whitby, a landmark in the history of the Church in England.
The present day ruin is the shell of a 13th-century Benedictine abbey that was demolished by Henry VIII during the Dissolution of the Monasteries.
This haunting cliff top ruin became the inspitation for Bram Stoker's novel, "Dracula".
Grade 1 Listed.
Admission charge. Visit the website 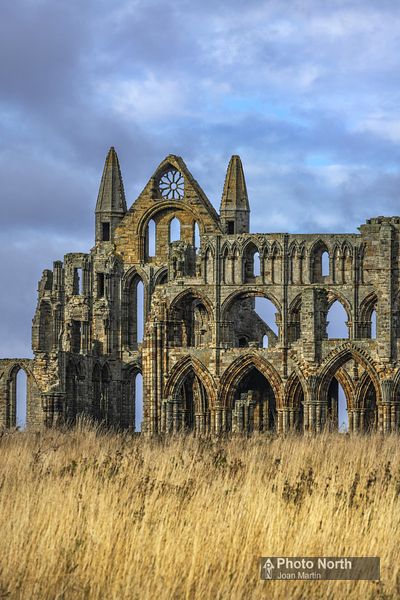 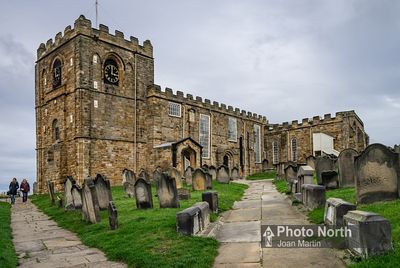 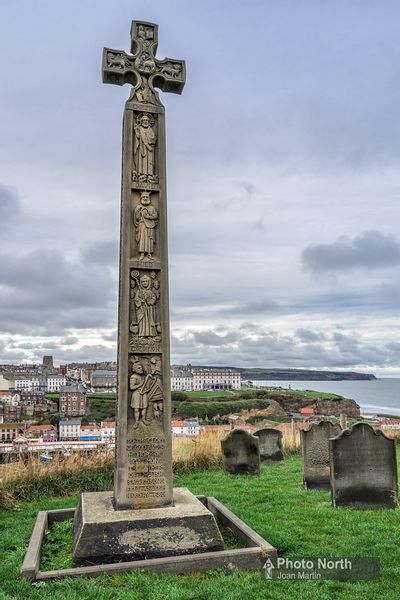 WHITBY 18A - Cædmon's Cross
Cædmon's Cross, St Mary's Churchyard, Whitby, North Yorkshire.
This memorial to Cædmon (c 657–680), an Anglo-Saxon Christian monk and the earliest named English poet, was erected in 1898.
The inscription reads, "To the glory of God and in memory of Cædmon the father of English Sacred Song. Fell asleep hard by, 680." 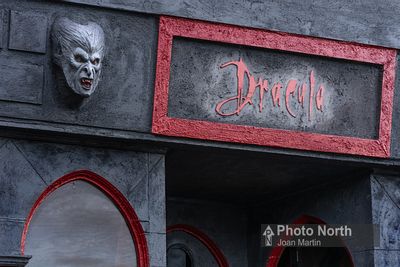 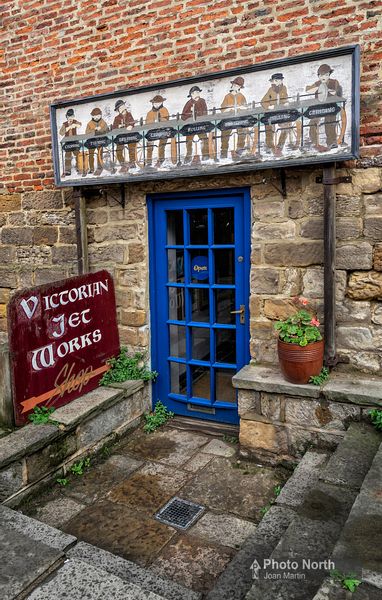 WHITBY 22A - Victorian Jet Works
Entrance to the Whitby Victorian Jet Works, a heritage centre, museum and shop in Church Street, Whitby, North Yorkshire.
Whitby Jet is a natural organic gemstone formed from the compressed wood of the prehistoric Monkey Puzzle tree. Whitby jet is found embedded in shale on the cliffs along the coastline between Robin Hood's Bay and Boulby near Whitby.
Powered by PhotoDeck
This website uses essential cookies. Learn more
AcceptDecline